James Dalby, our resident sound wizard and astonishingly musical fellow is running this week’s jam. Alongside it he’s prepared this remarkable blog post about sound effects for us. Enjoy!

Sound Effects & Improv – Techniques of analysis and association of sounds

Sound effects have a lot in common with music, and both have a language of their own. Such properties they share include…

fading IN or OUT

A sound effect in the arts, is an artificial sound recording that is used to connect the audience to various ideas portrayed in films, TV shows, radio shows, video games, or even art pieces. Together with music and dialogue, they can help bring many worlds to life (See Example 1).

Of course, music and sound have respectable roles in improvised theatre. We can still be better off without using music or sound effects as we have simpler ways of performing our scene ideas, but even sometimes we can’t help but make up sounds effects during a scene because they can add diversity, and can tell us something more about the scene that normal dialogue would find it unrealistic to portray.

In the many creative domains, they are used both in and out of the reality created in a scene. On-stage or “diegetic” sounds (e.g. people talking), and off-stage or “non-diegetic” sounds. (e.g. music). But there have been many examples of sounds that we hear in a scene that we would classify as non-diegetic, but can still be perceived by the scene characters, like when your spider senses start tingling and you hear an eerie sound whirring around your brain. Are these sounds diegetic or non-diegetic?

Regardless of their diegesis, sounds can depict all kinds of things. Not just from object sounds, but also to represent one or more of the following…

So how do we evaluate these sounds? What made them? What is it they’re trying to telling us? How can we tell?

Close your eyes, and bang two halves of a coconut together. You might simply feel that someone is banging two halves of a coconut together, or that it’s deceiving you into thinking there’s a horse trotting along, or a cuckoo clock ticking. It’s up to you to decide what it could be, whether it’s real or not, and it can be absolutely anything, provided it makes simple sense (See Example 2).

You associate your ideas from sounds in the same way you associate your plot ideas together in an improv scene, and that they must happen for at least a reason when they occur. If a sound is played at any point and is left unnoticed, it becomes bogus and pointless. If you hear something that sounds like a rhinoceros pitching a tent, then so be it, offer to lend it a hand, boil some tea, and treat yourselves to a nice Lancashire Hot Pot. Mmm-mmm!

Let’s say you have to come up with a sound that represents a giant boulder chasing an explorer through a temple. The fact that this boulder is huge, rough and is continuously making contact with the temple floor, means you simply have to produce a sound that is…

+ Low-pitched and loud, because of it’s size

+ Continuously rolling, because it is rotating

+ Noisy, because of its roughness

Regardless of whether a sound effect is ignored or not, they must also add something new and force a link with what’s going on in the scene. Sound effects in an improv game particularly work best when they create chaos (See Example 3).

Improv games involving sound effects can be split into two groups. Games where performers and sound effects work with each other, and those against each other to create a scene…

Whatever noises the person creating the sound effects makes will alter the course of the stage performance thanks to the new ideas they will introduce, which the stage players must compliment into the scene as much as their actions are complimented.

If you are playing as the sound effects artist, make your ideas clear through your sounds, and try not to barge too many of them into the scene unless required, in case the audience become distracted from what the stage players might be saying. Good concentration from the sound effects performer will also mean better consistency, and more effective sound effects (See Example 4).

A couple of weeks ago, Missimp were performing on opening night of the Carnival of Monsters in Beeston, and I was there to help operate the music and sound for the show. Nick was performing a monologue, when all of a sudden I accidentally turned up the volume whilst a track was playing. After I quickly muted the track, Nick had already complimented my mistake and bravely turned it into an opportunity for an idea and used it as part of his monologue. Mistake or not, anything is an opportunity (See Example 5).

I will be starting off our jam with a few simple exercises to help you get into identifying sound effects, associating them with objects and actions, and how they can be put together in a scene. Throughout the night, we’ll be playing lots of scenes using the following techniques of producing sound effects…

Sounds produced artificially by objects, clonking two halves of a coconut being the perfect example. The foley artist(s) will stand in front of a collection of objects. Their job will be to watch the performance and predict when the next sound effect will be required, and what it may be. At that point they must look through their objects and choose which ones they will use and execute them into the microphone if they can (See Example 6). The biggest challenge here will often be time delays when the foley artist has to find objects around that produce an appropriate sound effect on cue. If it happens, just keep playing out the scene. Either the foley artist or the other scene players are allowed the freedom to cue one another (See Example 4).

A scene will be played out just as before, only this time we take out the foley artist, and let my laptop do all the work. The performers are this time working against the sound effects, as they won’t know whichever one is coming up next and when. From time to time I may only supply a limited selection of sounds into the scene to add to the chaos depending on the improv game being played.

This term is not officially used in the industry, and I grant these are not classified as sound effects, but my excuse for using it is because of how music can follow similar principles to how sound effects are used (See Example 7). My first idea was to use a keyboard and have the foley artist perform the sound effects using the piano sound, but it would really require trained music performers for this technique to work well. Instead, I will have a selection of musical clips prepared for our games in the same way as with our sound effect bank.

Simple sound effects into the microphone produced by the human voice, known to be the most versatile musical instrument in the spectrum (See Example 8).

This proved itself to be great fun when we tested this out at Geoff’s improv jam earlier in October. All sound effects spoken by the foley artist as onomatopoeias. E.g. “Bang!”

If you have time before the jam, have a look at the examples I’ve linked to this article, and see if you can figure out how you think these sounds were made or could be made, and have a listen at the different styles of sound effects and how they add to the overall impression given by these works.

Before this cartoon was made, all other cartoons on the big screen were played with only music. In fact, Winsor McCay’s ‘Gertie the Dinosaur’ was played whilst Winsor talked to the character on screen. For ‘Steamboat Willie’, this was Disney’s attempt to prove that sound effects would work for animations. Most actions are represented with sound effects, but not all actions have to make a sound.

Watch this video and see if you can work out how each synthesiser sound effect composed by Raymond Scott fits to Jim Henson’s monologue. 48 seconds in, you start to hear bleeping sounds when Jim says, “It’s kind of like plumbing”. Most naturally we would associate the “bleeping” sound with “pipe dripping”.

“Improvisation My Dear Mark Watson” seemed to think it could help bring an improv scene to life more with the aid of graphics and sound. Even if the show in this example did enhance their scenes visually and audibly, one of the show’s main problems was that neither enhancement left nothing to the imagination. Could you imagine if you played the same scene, but instead of an “electric spark” coming from the finger device, sound you heard a cow mooing? It may not have be the focus of the game, but if it were, the sound of a mooing cow would give the audience more surprise.

Here are two professional improv performers at their best. When Colin hears his phone ring, he goes to answer it, when Ryan sees Colin in frustration, Ryan growls in anger into his microphone. Both exchanging ideas across through visual or audible clues like a ghost following Colin.

5 – Ghost Sounds in Whose Line Is It Anyway?

Imagine if a foley artist kept producing the same sound effect over and over. Yet in this example, each time Margaret [an audience member] howled into the microphone, Colin and Ryan had to disguise the sounds as ghosts, howling dogs, pole squeaking, a phone hum, and a whirling bat rope. By the end of the scene, you had Batman and Robin pushing a broken-down bat mobile (with broken seat belts) all the way to a crime scene…naked! Ryan later refers to Margaret’s howls as “the universal sound”. This goes to show that you can apply many new sources to the same sound effect from playing it in different points of a scene.

Sarcastic commentation on the sound effects are a common entertainment factor when foley is used on TV shows like the one in the above example. Because the performance was planned, there’s not as much chaos drawn from the scene as a result. However, the “growling bear” sound 2:53 into the video proved a surprise how it sounded so convincing.

Listen to the first few musical sounds and how they emulate Wile E. Coyote banging his hammer, creeping around, and watching his record player spinning round.

Byork’s ‘Medúlla’ album contains songs made up of nothing but sounds produced by the voice. 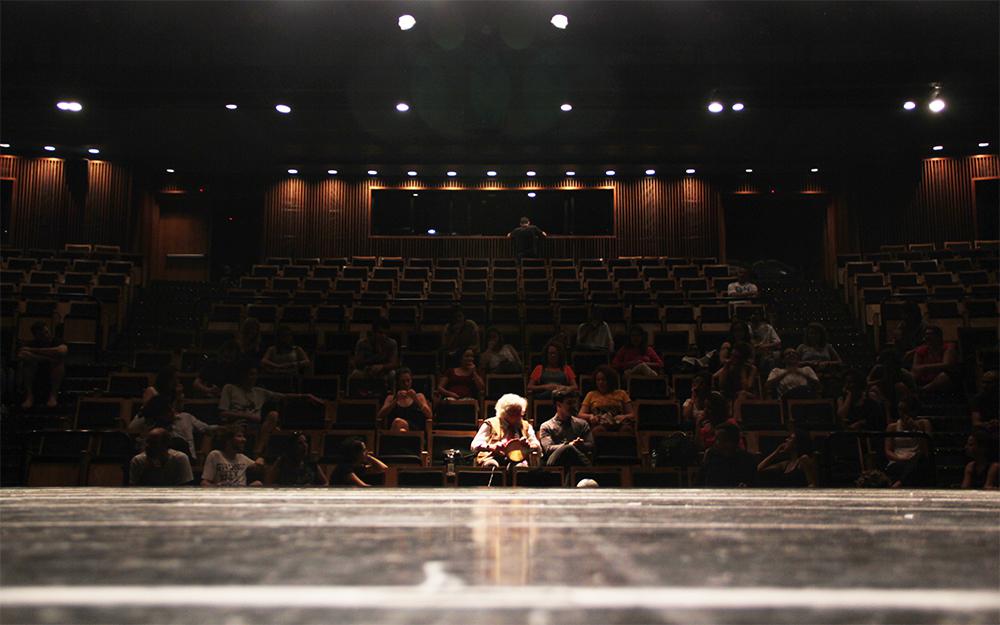