Improv and writing. It’s the same thing. Sort of.

Allow me a touch of geekery here. Last weekend I went to the fabulous Alt.Fiction event in Derby at QUAD. It’s a festival of sci-fi, fantasy and horror literature (a group of genres they often refer to simply as ‘genre fiction which I find odd as a description – what about the other genres – what do they get called?) which is attended by a whole bunch of writers, fans, editors, agents and so on. They organise talks, discussion groups, workshops and other events. It’s great. I stared at some writers whose work I adore (Alastair Reynolds and Adrian Tchaikovsky in particular) and took part in a couple of writing workshops in between drinking and buying books.

You might be wondering why I’m writing an improv blog about writing. Three reasons. 1 – I’ll write what I damn well like thank you, 2 – I write pirate stories (and other stuff) and 3 – all the advice we got in the workshops was incredibly applicable to improv comedy.

First up – 10 o’clock on a Saturday morning ‘That Killer First Page‘ with Rod Rees (lovely book called The Demi-Monde which I’ve been admiring for ages and having met Rod, have now bought). The first page of a book is all the agents and editors read and it’s the one that’s got to hook the reader. Rod took us through what works for him and why he thinks it works. Really it comes down to a couple of key things: establishing action, character and the reality (twisted or not) really, really quickly.

That 300 words is much the same as the first 20 seconds of an improv scene – establish character, relationships, place and motivation quickly. Starting in the middle of a scene is a great idea – The Demi-Monde opens with the main character Norma running for her life. He tosses in lots of intriguig details – always add detail to a scene; specicifity is good and always gives you ideas and material for later on. It also implies complexity and depth. Starting a scene by responding to a question or event (which obviously hasn’t actually happened on stage) can set a scene up beautifully.

The second workshop was much later in the day after I’d listened to Dan Abnett talk about being ludicrously prolific in the comic and novel world – he used to write Transformers UK back in the ’80s. Much better than the wanky US version. Anyway…

Graham Joyce ran a workshop called ‘Writing Sharp Dialogue’. He has the demeanour (and the look) of Sean Lock, which made this a most entertaining hour. I was keen to do the workshop because I struggle to write dialogue and instead write mainly first person stories to avoid it… Graham’s first point was that written dialogue isn’t like spoken dialogue, it’s a series of tricks – it’s what we think we sound like when we speak. If you’ve ever transcribed a meeting you’ll know how abysmally rambling and disconnected conversations are.

He gave seven rules to make dialogue bounce along:

Ah, brevity is the soul of wit and all that. Rod also observed that the shorter the speech the greater the energy and talked about anaphora, the repetition of a sequence of words. Repetition establishes patterns which capture the imagination and are often oddly funny. This works well in story games and is found often in Shakespearean dialogue – even the cod stuff. Saying less lets your partner say more and how you say it tells them about your character.

These are all useful considerations in any improv scene and I thought it was cool that similar principles applied so well in both writing and improv. Thanks Alt.Fiction!

In Your Head Improv 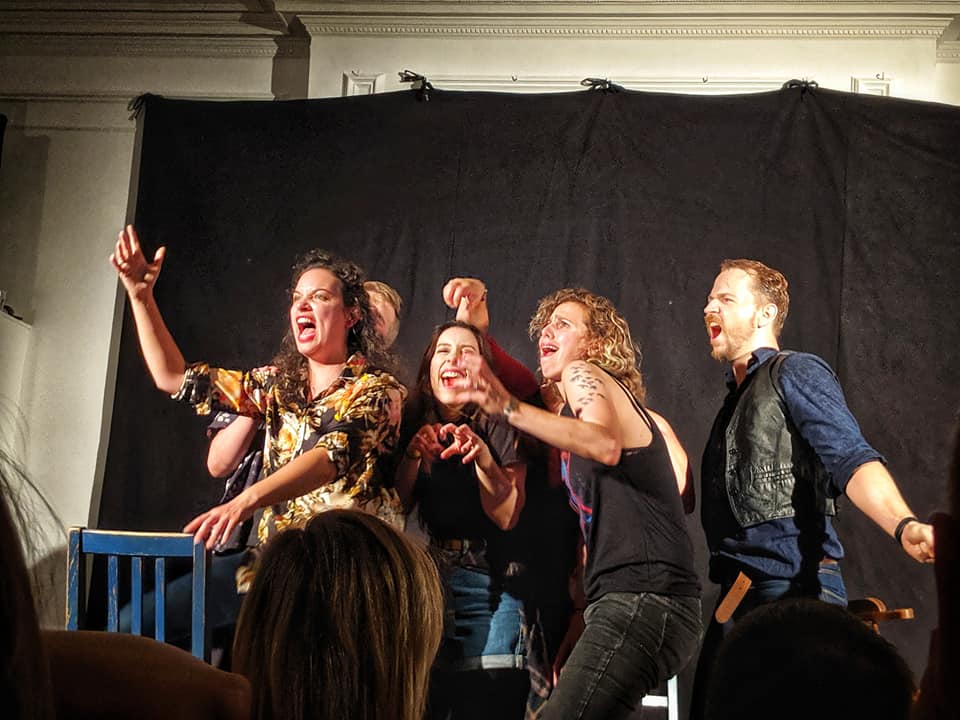